Danielle Katz, Co-founder and President: Rivers run through Danielle’s blood. At  four months of age, Danielle took one of the last runs down the Stanislaus River before it was dammed. At 14 she became a river guide, regularly working trips on the Klamath, Rogue, and Tatshenshini-Alsek in Alaska for James Henry River Journeys. In 2009 she paddled her first river from source to sea; 2,271 miles down the length of the Mississippi for the non-profit What About Blue, raising funds to build wells and sanitation projects in Rwanda. Inspired to connect more communities to rivers and each other from source to sea, she co-founded RFC in 2011. She has since completed several StS journeys including on the Tuolumne, Sacramento, Yuba, San Joaquin, and Androscoggin to name a few. She has an MBA in Environmental Management and is the founder of Source to Sea Productions. She loves inspiring people to connect with the water in their lives, sharing her passion for rivers, and spreading Source to Sea literacy. John Dye, Co-founder and Vice-President: John brings 40 years of on-water experience to the campaign.  His background in project management includes co-founding a youth aquatic fitness non-profit.  John has run fundraising events for the Sonoma Land Trust, the Tuolumne River Trust, and has worked as the Tuolumne River Trust’s principle guide and instructor. He teaches kayaking at California Canoe and Kayak and has had paddling articles appear in Surfski and Waterdog Ezines. Janet Whittick, Treasurer:  Janet fell head-over- heels for a paddleboard in 2012, and never looked back. Racing the Cal100 as part of a relay was a turning point, and now Janet races with O’Kalani Outrigger and volunteers as a SUP instructor to help get others on the water. Janet works as an environmental policy analyst, but her favorite days are spent downwinding or surfing with friends. She’s excited to tackle her own StS one day soon.

Amy Byers, Board Member:  Amy has been paddling for over 15 years in all types of water from New Haven, Connecticut to San Francisco, CA to the Yukon Territory, Canada.  She has raced the Yukon River Quest (444 miles of the Yukon River) in a sea kayak five times.  Amy has a Master’s in Public Health and a Doctorate in Epidemiology.  She is a research scientist who studies multiple chronic diseases within the aging process, utilizing large-scale data and a public health approach.  Her own quality of life with aging has been supported by a deep connection with nature.  Amy believes that one of the most important things we can do for ourselves and the world is to come alive in and connected to nature; and inspire others to do the same. 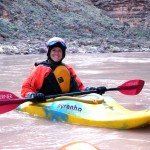 Pamela Rich, Board Member:  Pam’s discovery of whitewater kayaking in 1990 re-ignited her inner puppy. River highlights include trips down the Middle Fork Salmon in Idaho, trips down the Rogue in Oregon, 2 life-changing trips down the Colorado and many, many glorious days on rivers in California. As the saying goes, “it’s never a bad day when you’re on the river.” Pam’s day job is working as an organization development consultant at UC Berkeley where she supports team development and strategic planning.